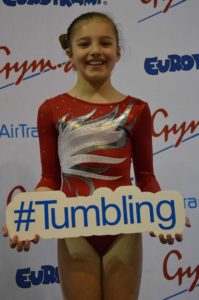 I had the greatest pleasure of meeting Sophia’s Mum, Becky recently. Sophia is 9 years old and was once a Gymboree Play & Music baby. I don’t generally get to meet the parents of Gymboree children once they leave and head out into the big wide world, I only see the start of their journey in life, so this was a rare and wonderful opportunity.

The meeting came about quite by chance. My son came home from school one day telling me that his form teacher’s daughter was really good at gymnastics and it all started at Gymboree Play & Music! I emailed his teacher to find out if this was true and Becky, the teachers’ wife, agreed to have a coffee with me and share Sophia’s story.

Becky found Gymboree classes by searching on the internet, having recently moved back to the UK from Australia with Sophie who was 11 months at the time. Chatting about Sophia and her classes, Becky tells me “She loved it, it was her first dip into socialisation. She liked following the instructions and making friends. She climbed up and over the climbing frames, we went every week”. Becky remembers Gymbo the clown, the parachute, some of the bubble songs, the air log and the theme changing each week. They both made lifelong friends at their classes. Becky’s friend Janice has since moved to New York, but they remain in touch.

Sophia moved on from Gymboree classes to Gymnastics, whilst also enjoying tennis and dancing along the way. Sophia is now a very accomplished gymnast (and still dances too!)  having been spotted by a talent coach. She regularly travels to Newcastle to train with an elite group of Gymnasts and dreams of making the GB team one day!

What’s remarkable about Sophia is that she failed the new born hearing screen test and at 9 weeks old had hearing aids. At 7 months she had cochlear implants and has never had speech delay. It seems that hearing care in Australia is world leading and as a result Sophia doesn’t sound deaf when she speaks.  At 7 years old she spoke in the  House of Commons at an Auditory Verbal UK event. You can see Sophie at 3 mins 17 secs.

Everyone at  Gymboree Play & Music wishes you all the very best Sophia.