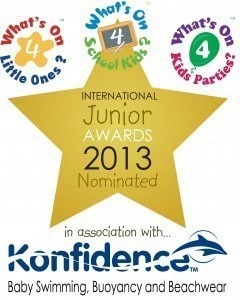 Gymboree UK is delighted to announce that they have once again been nominated for the What’s 0n 4 Little Ones awards – and this year they feature in four categories!

Excitingly, 9 Gymboree teachers have also been nominated as Most Outstanding Activity Leader for the Under 5s!

We have to give a special mention to Guy Lewis – Gymboree Brighton who has also been nominated. Guy suddenly died in January 2013 a week before his third child, baby Ela arrived. In Guy’s honour we ask to you vote for this extraordinary man, who epitomised Gymboree and was a true joy to all who met him.

Voting has already begun so  Vote for Gymboree to show your support!