Written by Jacqueline, a Children’s Occupational Therapist and Principal of Magnificent Munchers, Therapy for Fussy Eaters.

As parents the first thing we often do is blame ourselves for things that we think are not quite right and involve our children. However, it is very unlikely that a parent has caused their child to become a fussy eater.

When toddlers are around 18 -24 months, they become more independent and inquisitive about their environment. They are moving around more freely and exploring their world. We have evolved as humans to have some built in mechanisms to help protect us from harm at this stage of development. One of them is not to eat food which doesn’t look familiar. We don’t want to be eating everything we see and certainly not picking up and eating plants which may be poisonous, so nature has inbuilt a system to protect us from harm.

This stage of being wary of changes in food is called the Neophobia stage. During this normal stage of development tots become weary of new and different foods.

During the Neophobic stage my son would refuse biscuits if they were broken; no matter how much I tried to convince him it was the same biscuit. I tried telling him he was lucky as the broken biscuit meant he now had 2 biscuits, one for each hand but he would refuse to eat the broken biscuit! It didn’t look like his “picture” of a biscuit and therefore he didn’t recognise it as a biscuit.

The Neophobia stage is not the first time we become wary of change. At around 9 months babies suddenly become upset when passed to a stranger or may even refuse to go to familiar adults if something about them has changed e.g. a favourite uncle as he has grown a beard. They cry and become clingy because they are fearful of the change. The child is not being naughty they are learning to be wary of change. This is the same for food.

Often the food which is refused the most is those with a mixed texture and homemade dishes which can be incredibly frustrating. When you mix foods together or make them from scratch they are very rarely going to look exactly the same each time they are presented. Don’t worry this doesn’t mean you have to offer pre made food!

Some children have a more neophobic response than others just like adults; some will eat any food they are faced with and some will be hesitant to try new foods. 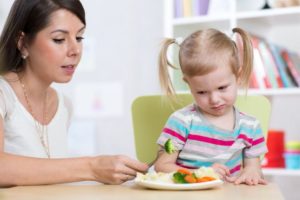 As adults, when presented with a new and unfamiliar food it is seldom we eat it straight away. We tend to look at it and try to categorise it with a food we already know drawing on all our knowledge of foods that we are familiar with. The bigger our range of food knowledge the better stocked our food knowledge “library” is. We are likely to prod the new food with our cutlery and might pick it up and look at it from different angles. We might smell it, cut it and explore the inside. If we are feeling brave, we may give it a little lick. We do this all at our own pace and are more likely to eat it if we see others eat it as we know it is safe.

Toddlers don’t have the experience we have as adults so their understanding of food is limited which is why changes in food can be distressing for them. They are unable to generalise their food knowledge at this stage e.g. crumpets, croissants, waffles may all be different types of breads to adults but to a toddler bread may be a specific colour and type e.g.sliced white bread.

Allowing your child to play with their foods enables them to become familiar with all aspects of the food; the look, feel, smell and taste. They can use all their senses to explore the food and get to know the detail of it. Through playing and becoming more familiar they will feel safer with the food and are then more likely to eat it.

What you can do to help Your Fussy Eater Toddler

Remember this is a normal stage of development so don’t panic! 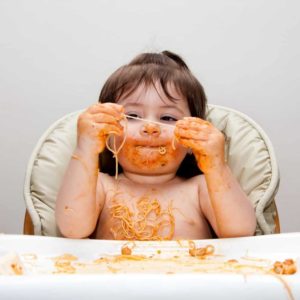 When to seek help:

If your child displays some of the following, then seeking further advice would be beneficial:

Becomes very distressed when messy especially around hands and face

Only eats a limited amount of textures

At Magnificent Munchers we believe in early intervention so children can learn to enjoy a range of foods and have enjoyable sensory experiences with food. Our Mini Munchers food therapy programme is aimed at 2-4-year old’s and provides parents with weekly tips to use at mealtimes at home. The hands-on sessions encourage lots of food exploration with toddlers using all their senses.