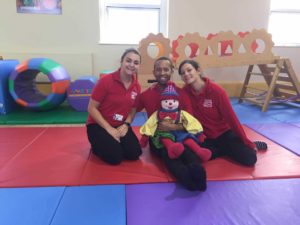 Gymboree UK is delighted to announce that Gymboree Warwick & Leamington Spa has opened in a fabulous new permanent venue.

Kelsey Brookfield has been working for Gymboree for over 6 years, originally as a teacher at Gymboree Islington and is excited to finally be opening his own permanent site after 2 years of offering on-the-go music classes in the local area.

Free trial classes can be booked in any of the classes on offer.