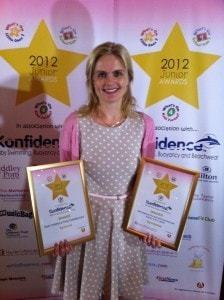 Having won this esteemed What’s On 4 Little Ones award in both 2011 and 2009, we are delighted to have achieved a win once again this year! What’s more, we also won ‘Best Children’s Party Entertainment’. A new win for us!

The awards were a huge success this year following a record 45,467 votes and 5,000 nominations. Gymboree UK Director and Mum of 2 boys, Susannah Sloman (pictured) explains “To be a finalist in the What’s On Awards is a great achievement given the competition but to win is a real accolade, and we are absolutely delighted. I’d like to say a personal thank you to all of the parents that voted for Gymboree”.